The rain does more than simply to eliminate glare, blare, and the stress that comes with them. It also adds something: a feeling of community that comes from the knowledge that everyone is under the same umbrella. When the rain comes, everyone stops doing his own thing and begins doing the same thing, dealing with the weather. Although I think of myself as an individualist, I must admit to taking comfort in the conforming, equalizing potential of a good shower.

One of my favorite activities is watching an approaching storm on the radar. 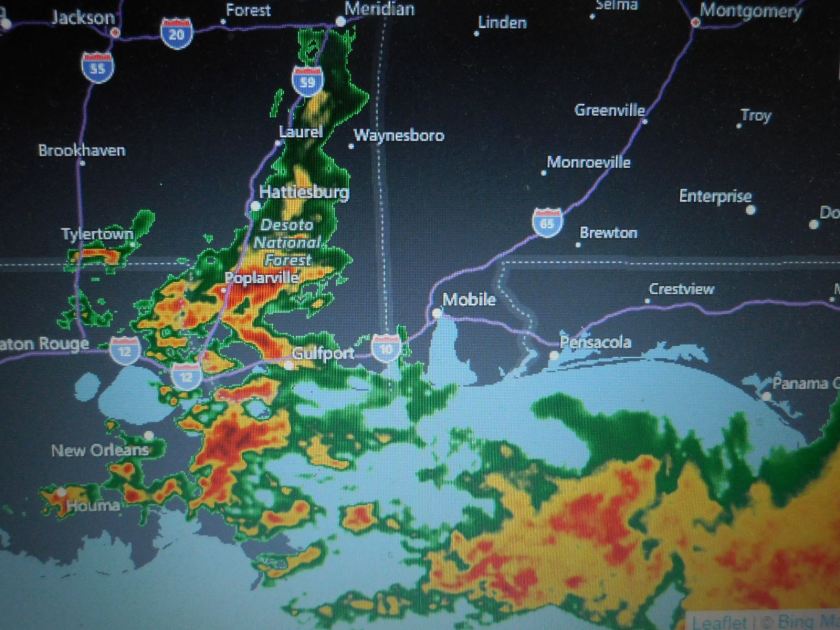 What a cure for loneliness! The front isn’t just advancing on me; it’s advancing on us. So there is an us, after all.

Of course, let’s hope none of us gets hurt or flooded out of his house; but, barring true disaster, it’s always fun to face inclement weather together. A lot of these feelings of excitement hark back to grade school “snow days” back home (in Baltimore, not Mobile), which involved such a consistent set of rituals – listening to the list of school closings on AM radio; jumping for joy when our school was announced; trying unsuccessfully to go back to sleep; marveling at the bluish-white hue of the daylight; rushing outside to play, build snowmen, and shovel the walk; soaking our gloves and socks – that they were virtually group activities, even though classmates rarely got together. Even without the snow, and well past childhood, the anticipation and experience of even a modest rainfall seems to invoke a sociable giddiness. “Well, here we go, dashing to our cars.” And then, off we go, dashing to our cars, separately yet similarly.

The limiting of experience to that which is predictably communal is an effect that can have many causes, not just the rain. National holidays serve the same purpose, especially Thanksgiving. We can assume that a great many people will be traveling on Wednesday (and I really like that everyone reading this sentence knows that “Wednesday” means “the day before Thanksgiving”), cooking and eating on Thursday, and (nowadays) maybe even going shopping on Friday. We’ve all done these things ourselves; so we know what people are going through. We can even call our friends to ask what time Grandma is coming and to check on the turkey.

Like the limiting of experience, the limiting of stimuli often produces communalizing effects; although rain might not necessarily be a factor, darkness, which accompanies rain, would seem to be essential. Sometimes, the exposure of different individuals to similar stimuli yields surprisingly resemblant reactions. One evening, for example, I was driving back home with my brother, after we’d both seen a movie together. A drizzle was falling, leaving little to see, aside from streetlights and traffic signals. Suddenly and simultaneously, we both blurted, “Bay-ah-beeee SNAAAYakes,” the first line of the Frank Zappa song “Baby Snakes.” Fairly freaked out, I broke off and started howling at the coincidence.

My brother, however, was quite nonchalant about it. “It’s not that extraordinary,” he said. “We’ve got similar brains, we just saw the same movie, we both like Zappa, and we’re looking at the same stuff. Naturally, we would respond to the environment in the same way.”

In fact, nighttime drives and daytime rains are interchangeable for purposes of this discussion, in that they work equally well to limit environmental stimuli and thus encourage shared reactions and a sense of togetherness. Nothing brings two minds closer together than the luminousness of the car dashboard at night. During a transcontinental drive, my friend Gene and I supped at a diner in Flagstaff and then drove off into the desert, en route to the Grand Canyon. It was pitch black – we might as well have been in outer space – save only for the dash. The audible world was likewise monopolized by the radio: A local station was broadcasting an old dramatization of the impeachment of Andrew Johnson (?), which, in the absence of anything else to listen to, was very absorbing; and Gene and I reacted to it with near uniformity (although we didn’t quite reach “Baby Snakes” territory). Between the glow of the dashboard and the roll call of votes to impeach (and, necessarily, nothing else), Gene and I must have been nearly of the same mind.

I am aware of the availability of sensory deprivation capsules and might like to try spending some time in one. However, two considerations dissuade me. First, it would feel too much like lying down in a coffin, and I’m not into that. Second, I would prefer some company in the capsule, or perhaps in a separate capsule, with identical simple images, like the moon or a car dashboard, projected inside, and the same Dvorak quartet or antique radio drama coming over the speakers.

Or I’ll just wait for the next rainy day.