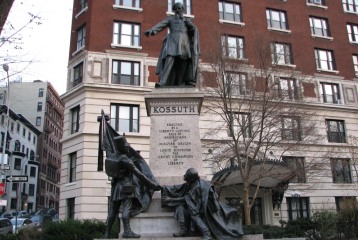 Saturday at noon, Lucy was late, and I waited in the unsympathetic company of Lajos Kossuth for her to show up. The usual resentment began to build up in my oft-stood-up heart; but I was pleased to note another advantage of jetting: It mitigated the risk of being bailed on, for even the most unreliable date had a financial incentive to show up. Sure enough, I soon espied Lucy crossing Riverside and waving at me.

She was not wearing her purple tights (I’d have to take that up with Ephraim) but had pulled on some kind of shiny black trousers. Black also was her moleskin jacket, but at least it wasn’t leather. She sported a Greek fisherman’s cap (oh God, isn’t that what Julia Roberts wore in Pretty Woman?), and her hair was curlier than I remembered from the party. She wasn’t particularly ecstatic to see me, but her disposition was sunny, and she struck me as a friendly “girl next door” in a family-channel TV movie. Her slight nervousness was charming in flat-affect Manhattan, and it peaked when, soon after arriving, she asked for her hundred dollars.

Having paid her, I conducted her to a bench overlooking the Hudson, because, after all the negotiation and research I had put into our date, I really wanted to talk to her. She was a Columbia undergraduate (we grad students called them “undies”), now a senior, majoring in psychology. She hailed from St. Louis and returned home each summer to work at her dad’s veterinary practice. She was going to head home for good in a few weeks, after graduation, and resume her customary off-season employment, before beginning a M.A./Ph.D. program in psych right there at Wash U. She would stay at her parents’ place and commute to school.

In my mind, I began to spin a narrative of how she’d bitten off more than she could chew in New York and now wished to retreat to a simpler place, but I was probably just projecting my own experience onto her. In fact, she proved rather unresponsive to my follow-up questions, as I fished for evidence of dissatisfaction – with New York, with men who weren’t me – which was how I sought to identify promising women in those days. Far from evincing any intriguing discontent, she betrayed a singular lack of profundity: It wasn’t that she avoided my attempts to steer the conversation into deeper water; she just wasn’t keen to go there – not with me, anyway, not for that first few minutes, as we sat watching the River.

Thinking that I could enliven our chat by asking “All right, so who the hell is Ephraim?” I was told only the basic facts about him, too. Ephraim had been her head resident during her freshman year, and they had remained friends ever since. He’d escorted her to a few parties over the years, and the role of jetting pimp was easy enough for him to fill, when the fashion caught on. I said something about how quickly she’d sent him over to me at the party and asked whether she always moved that fast, but the subject felt awkward, and she shied away from it.

I would have liked to go walking in the downtown direction through Riverside Park, but we began to notice crowds of people tromping north, and soon a parade began to move up Riverside Drive. Apparently, Grant’s Tomb was reopening after a months-long remodeling, and we had stumbled into the rededication ceremony. Lucy’s interest kindled, and I discovered that she was fond of history, even Civil War history. That sort of enthusiasm counted for a bit, I reckoned, even if it wasn’t quite as attractive to me as existential angst. We enjoyed the parade, and I suppose the experience was romantic, despite the lack of intimate conversation. The high point came when a group of reenactors marched by in black hats and Lucy and I simultaneously identified them as the Iron Brigade. Maybe another history geek would be the perfect girl for me, I thought.

After the parade, I suggested we go someplace for lunch, but she said she’d already eaten and had to study for an astronomy final. Having learned to keep expectations low, in dating and in everything else, I nodded the usual “I see.” I held out no hope for a return engagement, even, for our date, though not unpleasant, didn’t seem exciting enough to warrant one. I wished her luck on her test and was prepared to head off to lunch alone, when she suddenly grew coquettish and asked if I was busy the next Saturday. When I responded with a “What did you have in mind?” she cocked an eyebrow and said in a stage whisper, “Would a hundred bucks get me into your apartment?”