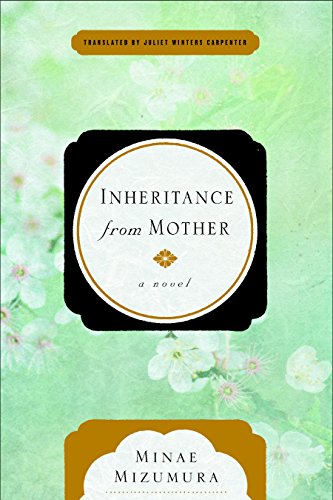 Inheritance from Mother is a two-part novel: Part I is almost entirely a flashback, describing protagonist Mitsuki’s mother’s prolonged decline and intercutting scenes of their relationship; Part II takes place at a resort hotel, where Mitsuki has gone to figure out what to do about her unhappy marriage (and it also contains many flashbacks). Part II was more pleasant for me to read, since I like hotel settings and internal dialogue in which characters figure out what to do.

The latter part contains one of the best portraits of relationship disappointment I’ve ever read:

As she sang, she felt enveloped in the peculiar bliss of singing – the sense that, at least for that fleeting moment, the world is in harmony.

She was halfway through the first verse when Tetsuo quietly left her side and walked slowly off to the pier.

‘The ship’s whistle sobbing, a flutter of cherry petals.’ She sang on alone, watching his figure grow smaller.

That was the first ‘why’ of her married life.

She herself was fond of hearing others sing at the chansonnier. Her past boyfriends had enjoyed hearing her sing. And Tetsuo was her husband – shouldn’t he listen gladly? This precise thoughts had not come to her at the time, but she had felt a voiceless cry tear through her, like an echo from the bottom of a deep well. (275-276)

Like Haruki Murakami, Mizumura includes copious references to Western music and literature, yet she also, without becoming nativist or reactionary, expresses resentment at the general degradation and sense of trauma that has accompanied Westernization.

Of course, culture flows both ways, and for every Mizumura character reading Madame Bovary, there is a Westerner like me reading Mizumura. On the subject of world literature, it seems to me that Japanese writers best capture the essence of modern bourgeois life: culturally amalgamated, materialist, and reflective, if not spiritual. Perhaps I am reading different literatures in search of different facets of the human experience in time. If Japanese novels are the best representations of the present, it is in European (especially Hungarian) literature that I find the most homesick remembrances of the past. American literature is where I turn for liberating visions of the future – which seem, ironically, to have been most vivid in the past.

(Maybe this last observation explains why I set my great American novel in seventeenth-century China.) At any rate, I will enjoy reading all of Mizumura’s books.